I have done my first real photo shop attempt. I tried to make a collage. Jase showed me how to do it but it's not the greatest but I think I did alright for my first go. So here it is---> 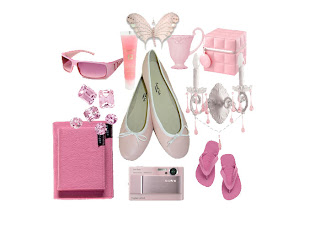 It's not the most fantastic thing but I tried and it took a lot longer than I thought. It's probly a bit squished but its the best I could do for now. I call it my pink collage. I will definately be trying to make more things soon.

In other news my lovely little nephew Isaiah won some photo competition. He took a photo of him and Caeleb and he won first prize in his age group!! He's only five. I've yet to see the winning photo. But he did win a digital camera and some vouchers for something =p. How awesome is that!? A five year old.

This is kinda like when Obi Wan fights Darth in 'A New Hope', and Darth says "The circle is now complete. When I left you I was but the learner. Now I am the master."

I see the relevance here. You have learnt well, and maybe now you will be even better than me :O

I like it, it's quite nice. Think you'll do really good once you've got some practice!

This looks really good! Plus I love anything pink, so that instantly scores points hehe. Thankyou for the links to my pages - I have linked you back also & will check for updates :)