My neck is so sore. I feel like I've got whiplash and I probably do after jumping around on my nephews trampoline yesterday. That Caeleb is a slave driver making us do 'ring a ring o' roses' 12 times on the trampoline. It was fun playing with him yesterday. He says the funniest things. 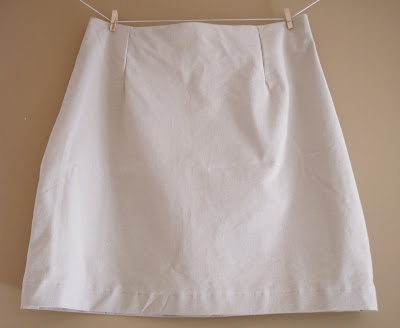 This is the skirt I made in my dressmaking class. I tried to iron it quickly before the photo but it still looks a little crinkly. I had taken photos of the other two items but the photos turned out bad and now there's no more sun. This skirt took me longer than I thought it would. I had some trouble with the invisible hem and even now it's still not neat. That's ok, I really enjoyed sewing and hope I will continue on with it (and get an over locker). 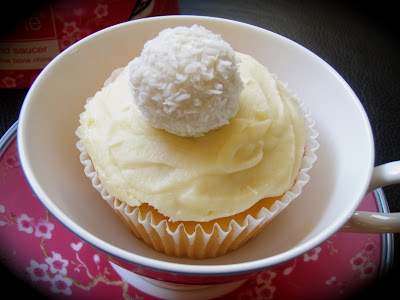 This delicious cupcake was a party favour from my friend Kristina's 24th birthday a few weeks ago (this was taken the day after not now lol). We played putt putt golf so the Raffaello white chocolate ball is to represent a golf ball. She baked them herself and it was so soo good. 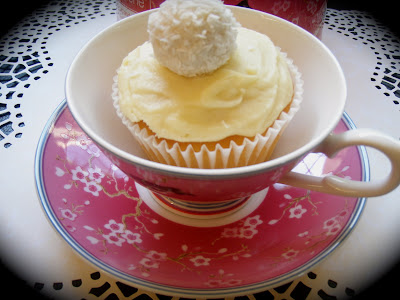 This is to show off my new teacup and saucer set I got from my brother Alvin and his gf. It was a belated part of a bday present for me. It's not the greatest photo of the teacup though, which is so pretty. 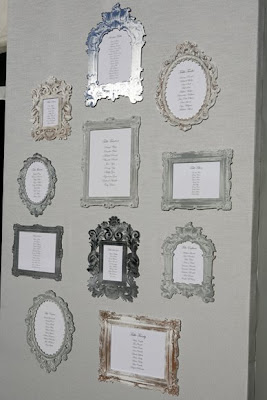 Image found Miss Laura via Real Weddings
My friend Laura had this wedding reception escort idea posted on her blog. I would love to use ornate frames as part of the decor and this would be perfect. 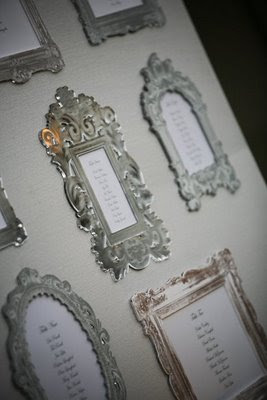 Image found Miss Laura via Real Weddings
The colours of the frames have influenced my colour theme choices, which I was struggling with (to pick a colour theme). So it's to be white, silver, champagne and blush. Hopefully I will be able to make an inspiration board with colours and ideas.
Anyway, off to relax, read and eat. Have a lovely weekend!

Do you want to increase your blogs backlinks and visitors? http://graciebellabutterfly.blogspot.com/

We help you to promote your blog or website with our free SEO Services like Social Bookmarking, Directory Submission and Article Submission.

Kindly add me at thomaslounge@gmail.com for more queries..

Those cupcakes look yummy...I might have to whip up a batch today. Also, I love the frame idea it really would look elegant and soft for a wedding. Have a good weekend...hope it is relaxing.
xoxo-meg
fiddlesticksandfunnygirls.blogspot.com

I love your cupcake in a tea cup. Cute idea! :) Have a great weekend!

the skirt looks great Gracie!! are you enjoying your sewing course....love those decal frames...pretty!

Michal (Skeletons Out of Closet) said...

The skirt is plain but beautiful!
I'm taking sewing classes too, I'm just about to finish my own skirt!

Your skirt looks fab, I can't wait to see you model it! And omigoodness how yummy were Kristina's cupcakes!!!

I have this pic in my 'inspirations folder'. It is such a lovely idea and you could reuse the frames to create a frame wall of your wedding photos.