Hello lovelies! A quick update on the Mercedes Benz Fashion Festival. It was lovely! It's always such a fun event. I didn't get that many photos as it was hard with lighting and people in the way. 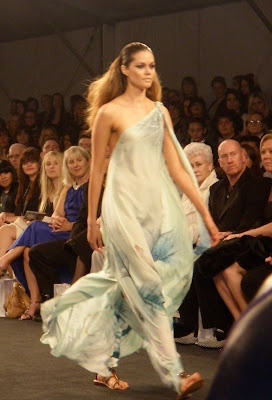 One of the better photos I was able to take. I loved the flow of the dress.

I liked the colour and style of this dress.
On the Saturday between the two shows we went off to the Rosemount Wine Bar at QPAC. And the best thing they had was a photo booth. It was free too! We got one photo but could download the photo from the website. 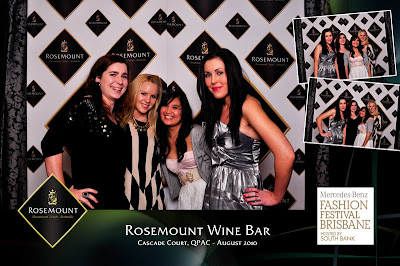 You can click on the photo to see it larger (I hope). I'm the smallest of everyone again. We had two lots of photos because there were a few of us. Plus they were going around a giving us a sample of the Rosemount O wine. Soo good and it served with ice :) I was ready to buy a bottle I liked it so much.
After the second show we all went off to have dessert at Southbank. It was delicious and fun. I love having these girly outings.
On Sunday, Kristina and I went in a little early as we went to church first. We had breakfast and I had the cutest hot chocolate. It was cute the way it was served. 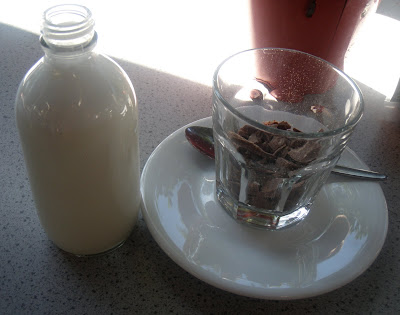 Crushed up chocolate and a tiny milk bottle. The milk was pre heated too.
I didn't get any photos from the Sunday besides that photo above, as my camera battery died. I thought I had recharged it the night before but I obviously didn't.
And it was the Swimsuit show which is one of my favourites. It's always so colourful and happy and makes me long for summer.
So this was meant to be our week of organisation which hasn't really happened but more about that next time. I have so much to do. You still have time to join the swap but it closes next Wednesday 18th.
I'm also involved with the Dear Darlings Penpal project over at Oh, My Darling. I have my group of penpals for me to write to so I will have to start that very soon :)
I hope you have a wonderful weekend. I have so much to catch up on so I should get a move on.

SO so jealous! This looks like it was amazing with your friends. You are so cute too!

That hot chocolate looks so delicious!!
Have a wonderful weekend too.

1. I love that first dress and its flowiness too. 2. That IS the cutest hot chocolate ever. 3. I hope you are having lots and lots of fun!

The fashion show looks like such fun! Also, thanks for the Dear Darlings mention -- I greatly appreciate it, and I'm looking forward to your Just Because You're Lovely swap, too!

What fun! That looks like a glam evening out, you look gorgeous! That hot chocolate is darling, too! Lucky you! XO!

This sounds like soooo much fun!! And that first dress at the fashion show is simply beautiful!!

Happy friday to you!

You are so lucky to have been. And again, I love that dress you wore!!

I love that hot chocolate set-up! Too cute.

This looked like such a wonderful weekend--filled with WONDERFUL food, fashion, and friends!

Looks like you had an awesome time. How much fun are photobooths?! I love them!

That hot chocolate looks incredible. Where did you get it from?

I've just been given my penpals from Dear Darlings. I have one from American, one from the UK and one from New Zealand. I'm stoked! Where are your penpals from?

Good luck with the organisation! I swept and dusted today which is more than I've done in a while :/

ahhh i'm so jealous! the fashion shows look awesome and you got some great photos. yay for fashion week!

Ahhhhhhhh, what fun! You looked SO darling!

Love that first dress! That's how they do hot chocolate here quite often. They call it a submarino :) I'm doing the Dear Darlings too. Have so much fun! xo

That first dress is stunning !!! x

Oh my goodness, the pictures look incredible! It sounds like a fun time. Love the hot choc too!

I'm a new follower of your blog- I really love it, it's so positive and I can tell that it will be a daily read.

looks like a great time!!! its great you get to go to these events - lots of fun! hope it inspired you for summer time....

Ah, that first dress is so magical and flowing. The colours are so joyous together. Can imagine wearing it to a music outdoor festival in Europe somewhere;-)

Can't decide which I'm more jealous of, your hot chocolate or that you got to see 2 fashion shows!!!!