I have caught up with all my mail! I have a few post card swaps going on too which I will share next time. Here are a few sneak peaks with what is being mailed out.
Outgoing 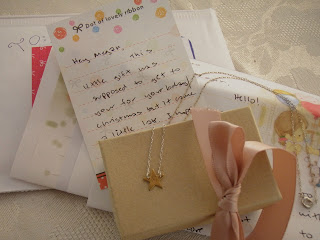 I know that Megan has received this so I thought I would show it. Letter and a tiny star with the initial M. 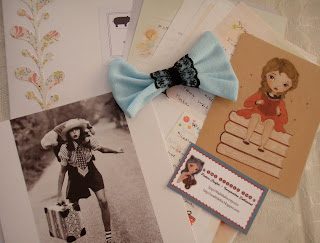 My last letter to Micaela. The bow is from Erica's etsy shop Sweets and Hearts. And the book post card is from The Little Fox one of my fave Etsy shops. 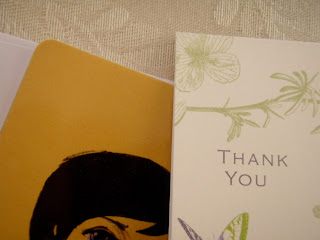 This is for Claire. Though I will be sending her out a book too. 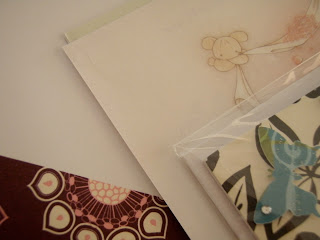 This is for Ruth. 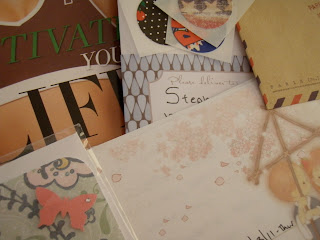 This is for Belen :) 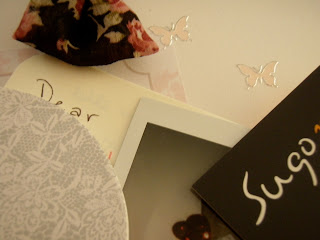 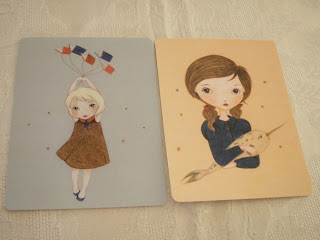 And I won't say who these are for :) So it will be a surprise when they receive it. From The Little Fox etsy shop.
I do have a question though, I show 'sneak peaks' of the letters because I'm not sure if my pen pals want to see what I'm sending. So if you don't mind seeing before receiving, let me know and I will show a full photo for your particular letter.
Another thought, I was thinking of doing a little swap (nothing big because they are too stressful and half the time partners bail) maybe something simple like a letter and a post card swap? Or like the post card swaps I'm participating in now - a Scavenger Hunt post card swap or write your memoir in 6 words post card? Let me know if you're interested at all.
Have a great rest of week.

Congrats on catching up with your mail! I'm on vacation in New York City (it's spring break!) but I come home tomorrow and I'm gonna do just the same . . . and a letter to YOU is certainly in order. So fun to see what you're sending out (and receiving, too, when you share those with us!). I love mail posts. <3

so cute! wish I was receiving these :)

I love your mail posts!! It's always great to see happy mail aside from the usual bills :)

You can count me in, with your mini swap whichever one you chose is perfect!

P.S. Lol you did not lie, you made a mistake, I google magpies and they do look scary and very much like crows :)
I gave you an award on my blog :)

I haven't done a swap since Christmas. I'd love to play along if you organize one!

Just going to get cozy in my bed with a pile of writing paper now. Good-night from Canada! xo

I am also the same. Do I photograph what I am sending and put it in my blog? it is hard to know really, sorry I am no help at all :P

I'd love to do a little swap! my mailbox has been empty for far too long.

Awww lucky girls! And I am a huge fan of swaps, and am doing one right now:-) Yayyyyy!

well aren't they all luuuuuucky?!! hehe - so many goodies here!

I tend to take photos and then post them after I know the person ash received my letter/package. That said, I've been really slack with taking mail photos lately :(

If you do a swap, I'm totally in. Maybe you could make it quite specific and simple - a letter swap, a post card swap, a photo swap ... something that isn't too big so if people miss out it's not a huge disappointment. That said, if you do decide to do a swap and people do miss out I'd be happy to send some stuff to those who missed out :)

I love the feeling of accomplishment when I've sent letters! loooove!

awww all your mail swaps look so lovely!! and sooo adorable! I would love to take part in a mail/postcard swap. Please count me in :)
xoxo

ooo you have some pretty items there! (: yeapp interested in a swap!

i love how much you support the etsy world gracie :)

I would love to participate in a swap! :) All the ones you listed sound fun.

I actually mailed you a postcard last week since you said you missed getting mail... Hope you like it! I wonder how long it'll take to reach Austraila from Alabama!?

i think you are the best pen pal ever!!! your outgoings are ALWAYS so thoughtful and special... i am so happy to be on the list! and i LOVED my card and the bow!!! so pretty-- but of course! if i had to describe your taste, it'd be PRETTY! ;)

also, thank you for our "sisterly connection"-- your email made me feel better! ha it was just SO YOU.

That little star necklace is so sweet!

Love the mail you've sent out as well. I would be in for a postcard swap or any kind of swap related to letters. I love swaps as you've probably noticed from my blog. Bye for now, Jacqueline

i would looove to be a part of a postcard/card swap. sound heavenly and i love all of your cards and snail mail. you are on the one who inspired me to pick it up again girl! i am going to get some of the fox postcards. too adorable. hope you are enjoying your week - giveaway at my blog home tomorrow. :)

How are you so good at this? I always am on the "I owe you" side of letters with my friends.