For the next two weeks I'm really quite busy, but I thought I should just update a bit. It's so close to the musical. We only have next week and then the week of the musical to practise and rehearse. I'm freaking out a bit cause we have had to change things constantly as we have started rehearsing with the actors. We are all so tired, stressed and emotional but we know we are doing this for a purpose. It's the Easter musical. We are doing this to show people Jesus great love he has for us. And if this can affect people its worth it.
Anyway, I thought I would add a few things.

This movie here 300 Jason really want to see. I'm pretty interested now as well =). I wanted to put the trailer here but for some reason it won't let me sigh. I'm getting Jason the graphic novel of 300 as part of his birthday and he already knows this so its not a surprise. The main actor in this is Gerard Butler. I know him from Phantom of the Opera. He plays the Phantom. Also David Wenham is in it as well. He's Aussie and plays Faramir in Lord of the Rings. I have a soft spot for him lol. So it comes out in a few weeks. 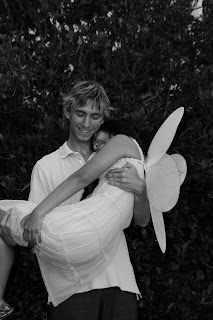 This photo was taken at my birthday. My friend Laura takes photos for fun but she has this awesome camera. And this is one of her favourite photos from that night. I'm wearing fairy just for the photos =p. Anyway, I should get back to the Spanish study for my exam on Monday. xox
Posted by Gracie at 3:02 pm

300!! Is only a few weeks away yayaya can't wait. And reading it is only a few days away! Horray!

Nice photo as well, we should get more nice ones of us :)

Musical is almost sort of over, then you can relax in my spa if you want. And now we can have wine :) lol and candles. Ah romantic.

I have been reminiscing over your blog, I love this pic, so gorgeous...

You are such a beautiful girl x