Well lovelies....it looks like I'm off to Bathurst tomorrow. Jason is flying me down to Sydney and then they will pick me up from there for the 3 hour drive to Bathurst. Apparently he really wants me there :p So I will have to go and pack soon. It's a 5am flight ugh! And it's my first flight by myself. I know it's only interstate but I'm a little apprehensive.
Anyway, this morning I went to my nephew Caeleb's preschool Christmas concert and graduation. He's going to be in prep next year.
There were three levels to perform today and poor little fella got a bit of stage fright and didn't want to sing. 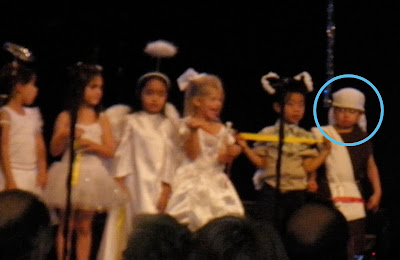 Little Cael on stage before he went off. Sorry the photos are so fuzzy. I wasn't close enough to the stage. He's supposed to be a shepard. 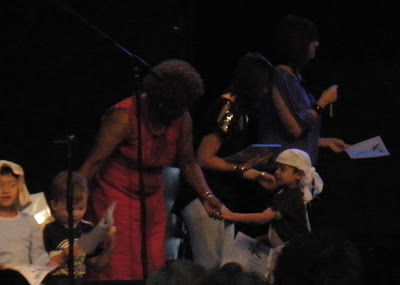 But he was fine when he 'graduated' from preschool. 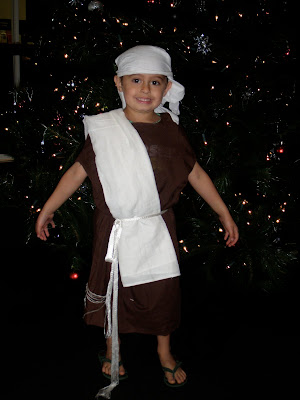 The little shepherd is so much happier away from the stage. 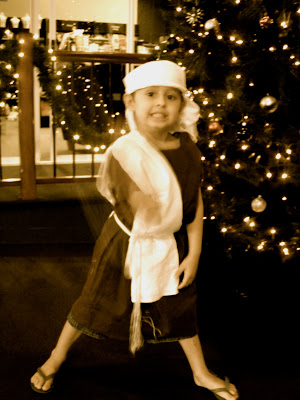 Which is so weird because he's a real little entertainer. He normally loves to sing. 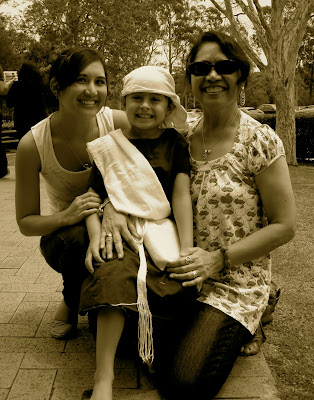 Me, Cael and mum after the mini concert. 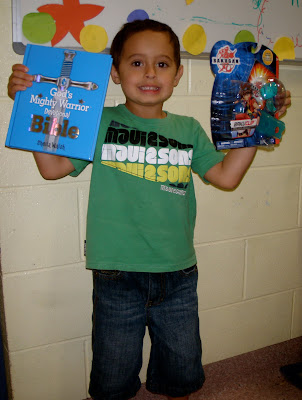 Cael with his gift from preschool (left) and his parents on the right. His preschool is part of Christian Outreach Collage which is the school that's part of our church (we have a pretty huge church). 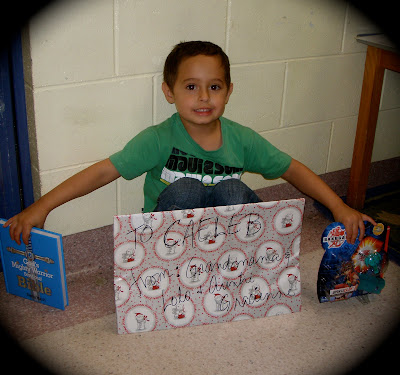 Cael posing with another gift from my parents and I. It's a giant colouring in book. He loves to colour in. He's very creative and thinks outside of the box. 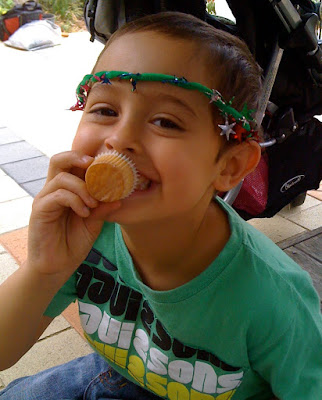 He's much happier now. This was the morning tea time. Unfortunately I couldn't really eat anything because my tummy is still sensitive. I put the little Christmas crown thing on his head. 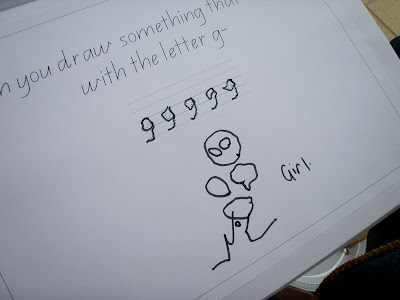 Ok this seems kind of random but it's Caeleb's drawing. They had this alphabet book where they learn to write the letters and had to draw something that started with that letter. He drew a girl....with her bits. lol The two circles on top are the 'boobs' and he drew a 'wee' hole. He didn't say that but Liz (his mum) and I concluded it from the picture. lol. It's pretty funny though kind of embarrassing for a 4 year old to be drawing. I don't know what happened to her hair and arms.
So yes, he is very random like that. For instance for the letter F he drew a fire. Of all the things to choose. For the letter X he drew a letter C which is to represent him because his name is Caeleb Xavier. He definitely thinks outside of the box.
Anyway, I should try and pack a few things and I really hope you all have a wonderful weekend!! Take care xx

He is sooooo cute!!! That little shepherd costume! I love it!
And I think it's awesome that Jason wants you there... safe travels.
And I have to tell you- the name of the place you are going makes me think of Bratwurst... which are one of my favorite foods, so now I am hungry :)

Born to be Mrs. Beever said...

So super cute...I loved that my sis and family would all come to my daughter's little recitals and school plays while she was growing up (she's 14 now). I can't wait to experience that with my little niece and nephew.

Btw, what part of Australia are you from? We are going to Brisbane for our honeymoon and would love any tips on where to stay or what to do. :) Have a safe trip.

aww he is soooooo cute xx

Hahah i love your drawing!
the boy is going to be such a smartie once he grows up!

How cute! And enjoy your trip!

Caeleb is sooooo cute!! what a darling little shepard he makes!

So sorry you had a nasty stomach flu. But glad you are feeling better now!

Have a lovely trip! I'm sure the flight will go fine and that you will have a great time!

Kids really do, do the funniest things don't they!
Hope you have a lovely time in Bathurst - take it steady and hope you feeling right as rain soon! You are very brave travelling alone though.
Take care
xx

That's so sweet of Jason! Ah, which girl wouldn't like to feel super duper wanted? Awww! :)) Hope you had a good flight and journey to Bathurst, love!

Your nephew is so cute and funny! He really does think quite differently. Creative mind!

I have a little somthingh for you on my blog xx

Have a super fun trip...so fun that you get to go...you'll be fine traveling!

1. CAEL IS SOOOO CUTEEEE, if I was there, consider I can babysit EVERY time :)

2. Jason is sweet, really. He must really want you to watch him MC-ing :) Have a great trip!

Thank you for posting that. SO cute! I can't wait until my little dude is putting on little shows like that. Hope you had a fabulous weekend!

Kids, have such a creative mind and way to put down their thoughts into drawings or words. He's a mega good looking boy!

Hope you enjoy your little getaway!

And thanks for the award sweetie xo

oh he is the cutest thing gracie! aww! and how sweet that jason is flying you out and picking you up.. i guess you're home already but im late catching up on these. ill go to your next post to see how it was ;) and that girl picture cael drew made me laugh out loud!